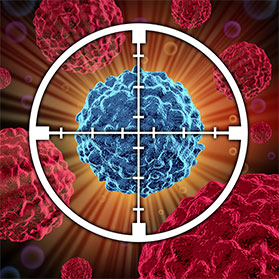 What are the goals of targeted therapies?

What types of targeted therapies are available?

Signal transduction inhibitors block the activities of molecules that participate in signal transduction, the process by which a cell responds to signals from its environment. During this process, once a cell has received a specific signal, the signal is relayed within the cell through a series of biochemical reactions that ultimately produce the appropriate response(s). In some cancers, the malignant cells are stimulated to divide continuously without being prompted to do so by external growth factors. Signal transduction inhibitors interfere with this inappropriate signaling.

Cancer vaccines and gene therapy are targeted therapies because they interfere with the growth of specific cancer cells.

What are the forms of targeted cancer therapies?

There are two forms of targeted cancer therapies, monoclonal antibody drugs, and small-molecule drugs. Monoclonal antibody drugs are synthetic versions of large immune system proteins (called antibodies) designed to attack a very specific cancel cell target or other cells. These types of drugs are referred to as “biologics” because they are made in living cells. Small-molecule drugs are chemicals like most other types of drugs. They are not antibodies. Since antibodies are large molecules, they are referred to as “small-molecule” targeted drugs.

How are targeted cancer therapy drugs given?

The most common ways to give targeted therapy drugs are by mouth, either as a pill or capsule or into a vein via intravenous administration. Some targeted drugs might be injected through the skin into the muscle layer.

If you take a targeted drug by mouth, it is very important to take the exact dose, at the right time, for the entire duration of the prescription. For some cancers, targeted drugs are taken by mouth for many years. IV drugs are usually given as an infusion that can last 30 minutes to a few hours. A mixed drug solution flows from a plastic bag through an IV line into one of your veins. The infusion might be done in your doctor’s office, in a clinic, in a hospital’s outpatient department, or even at home. Talk to your doctor or nurse ahead of time so that you know what to expect during treatment.

What are the limitations of targeted therapies? Targeted therapies have been discovered in recent years, the impact is limited to some specific types of cancer. Although targeted therapies are typically tolerated better with less toxicity compared with conventional cytotoxic drugs, they can lead to serious adverse effects.

Drug resistance also limits the efficacy of these targeted therapies, as is the current clinical situation regarding conventional chemotherapy. As the malignant phenotype is often regulated by multiple parallel pathways, the cancer cell will use alternative signaling components in order to survive. Importantly, understanding resistance mechanisms could provide the basis for the design of second-generation therapies.

What are the side effects of targeted therapies?

Autoimmune reactions – Sometimes, targeted therapy will activate the immune system and causes autoimmune reactions in multiple organs including lungs, liver, skin, eyes, or nervous system. This side effect is not common but can be life-threatening.

What causes side effects?

Although targeted therapy drugs don’t affect the body the same way that standard chemo drugs do, they can still cause side effects. There are many different types of targeted drugs, and the side effects of these drugs depend largely on what each drug targets. Some drugs target substances that are more common in cancer cells, but are also found on healthy cells. These drugs can affect healthy cells, too, causing side effects.

What should I know about side effects?

Not every person gets every side effect, and some people get few if any. The severity of side effects can vary greatly from drug to drug and from person to person. Be sure to talk to your doctor and nurse about which side effects are most likely with your treatment, how long they might last, how bad they might be. Your doctor may give you medicines to prevent some side effects before they happen or to treat certain side effects once they occur.

Rare and unusual side effects can happen with some of these drugs, and some can be serious. All changes and side effects should be reported to your doctor.

Although side effects can be unpleasant, the less serious ones must be measured against the need to fight cancer. Six Things to Know About Hand, Foot and Mouth Disease